“It seems that all my bridges have been burned,
But you say that’s exactly how this grace thing works
It’s not the long walk home that will change this heart,
But the welcome I receive with the restart ”
{Mumford & Sons – Roll away your stone}
In Luke 15 Jesus tells a story about a son who blows it big time. He asks his father for his inheritance early, not prepared to wait until his dad dies. He takes the money and goes wild. He lives it up. He parties hard. He lets the good times roll. The drink is flowing. The girls are plentiful. He thinks he is living the dream.
And then the money runs out. Everything collapses around him. Suddenly people want nothing to do with him. Without his fortune he is nothing. He is away from home, away from his family, away from real friends, surrounded by debt and people who only liked him while he was funding the party. The only job he can get is feeding pigs. He has to get by on scraps left over from feeding the pigs. He has hit rock bottom. He went from a place of affluence and fortune to despair, poverty and regret.
It is in the muck of the pig sty that he decides to return home and beg for a job from his father. He plans out a speech. “I will go home to my father and say, “Father, I have sinned against both heaven and you, and I am no longer worthy of being called your son. Please take me on as a hired servant.”’” (Luke 15:18-19). And so he begins the slow walk home.
And as he gets close to his father’s land something incredible happens. Culture dictated that if a son took his inheritance before the father died he would become an outcast, shunned by his village. He could have been killed just by going too near to his old home. By while he was still “a long way off” his dad comes racing towards him. Running not to condemn but to embrace. With his hug he protects his son from the risk of death. With his speed he shows his concern. With his timing he shows he was waiting, hoping.
In that society elderly men simply did not run. People wore robes that were impractical to run in. To run meant casting them off and exposing yourself. It was a big deal for the father to run to his wayward son. And the fact that he ran while the son was still a long way off meant he must have been looking out for his return, longing for the day they could be reunited, reconciled as a family.
And then the son tries to make his speech, but he gets cut off mid way through. He only gets to say the first part about how he has messed up. The father interrupts before he gets to the part about wanting to be taken on as a hired servant. And that’s when things get truly amazing. “His father said to the servants, ‘Quick! Bring the finest robe in the house and put it on him. Get a ring for his finger and sandals for his feet. And kill the calf we have been fattening. We must celebrate with a feast, for this son of mine was dead and has now returned to life. He was lost, but now he is found.’ So the party began.” (Luke 15:22-24)
The son had reached about as low as he could go. He had turned his back on his family. He squandered his father’s fortune on wild living. He made many mistakes. He burnt many bridges. He turned to his father as a last resort, hopeful of possibly being allowed a servant job. And instead he gets a party. That’s grace.
The father doesn’t wait for the son to get it all together. He doesn’t wait for him to pay off his debts. He doesn’t wait for him to clean off the muck from the pig sty. He doesn’t wait for him to wash off the sweat of the long walk home. He sees him coming, and he runs to him.
It’s pretty obvious what the message Jesus was trying to convey through this story. The father is God. The son is us. We screw up royally. We make mistakes. We don’t deserve anything but death for our sins (Romans 6:23). It looks like we are totally hopeless, with all our bridges burnt. But then something incredible happens.
When we turn to God He runs to us. Running not to condemn but to embrace. His arms are open wide. His is waiting, watching for us to turn to Him. He is willing to pour out grace and rescue us from the pig sty of our sin and brokenness. He has a party for us, not with a fattened calf, but because of a sacrificed Lamb. There is a welcome waiting for you that will change your heart. You don’t receive it through a long walk home searching for God. Simply start, and He will run to you.
I don’t know your story. I don’t know what you’ve done. I don’t know from what heights you have fallen. I don’t know what mistakes you’ve made. I don’t know what regrets you are carrying around. I don’t know what shame you have to deal with. But one thing I do know. Our Father is watching, waiting for you to turn to Him. Longing for the day He can run to you with the embrace of grace. If you are still in the pig sty today know that you don’t have to remain there. There is a party waiting for you. 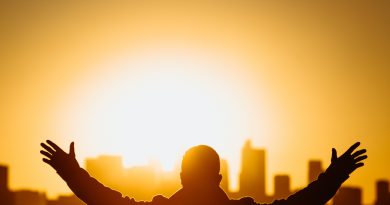