“One of the criminals hanging beside him scoffed, “So you’re the Messiah, are you? Prove it by saving yourself—and us, too, while you’re at it!”” Luke 23:39
As they crucified Jesus there were two criminals being executed beside him. Two men who had broken laws and were facing the consequences of their actions. And in the middle, the Lord, the creator of heaven and earth, who had broken no laws and was facing the consequences of our actions.
The criminals knew Jesus’ reputation. Everyone knew his reputation. They had seen the grand entrance on a donkey. The talk of the town had been of this Teacher who spoke of love for enemies, healing for the blind and promised to give water of life to all who asked. They had seen the Pharisees debate with him. They had been shocked to hear of his arrest. They began to doubt his claims. Then they were outraged to hear he had blasphemed God. They believed he deserved to die. They cried out for his death. “Crucify!” they cried. And now he was hanging on a cross, the sign above his head reading “King of the Jews”, his body a pathetic, bloody sight. The man who claimed to be the Messiah, the man who claimed he was going to save the people of Israel, hanging on that cross. Beaten. Whipped. Scarred. Dying.
So the criminal beside him taunted. “So you’re the Messiah are you? Prove it by saving yourself – and us, too, while you’re at it!” And he meant his words as an insult, to rub salt in the wounds as Jesus hung there, struggling to breathe, in agony with the pain from the lashing the soldiers had given him the night before. But ironically they proved to be prophetic in a way that criminal couldn’t see. Because as He died on that cross Jesus took the punishment we deserve. He became the one complete and all sufficient sacrifice for the sins of the whole world. His blood covered the stain of sin for all mankind. As He was hanging there on the cross, as the criminal scoffed Jesus was saving us too. It had to be that way. He had to die in order to save us. He had to offer Himself as a spotless sacrifice. He had to drink the cup of wrath. The criminal thought he was taunting, but really he was describing. Jesus was saving us too, but we need to recognise it. The criminal on the other side did. He admitted he deserved to die but Jesus was innocent. He asked Jesus to remember him when He came into His kingdom. Jesus’ response? “Today you will be with me in paradise” (Luke 23:43).
Two criminals. Two responses. One scoffed. One repented. One taunted. One trusted. One died. One entered paradise.
And now as we look at the Cross the choice is ours. We can see a failed messiah who couldn’t even save himself. Or we can see the sacrificed Messiah who died to save us, too.
“Christ suffered for our sins once for all time. He never sinned, but he died for sinners to bring you safely home to God. He suffered physical death, but he was raised to life in the Spirit.” 1 Peter 3:18 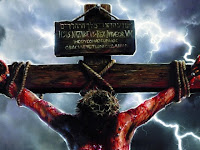