“At that time the Roman Emperor, Augustus, decreed that a census should be taken throughout the Roman Empire. (This was the first census taken when Quirinius was governor of Syria). All returned to their own towns to register for the census. And because Joseph was a descendant of King David, he had to go to Bethlehem in Judea, David’s ancient home. He travelled there from the village of Nazareth in Galilee. He took with him Mary, his fiancee, who was obviously pregnant by this time.” Luke 2:1-5
Through a series of events the circumstances had all been laid in place for the prophesy to be fulfilled. The serpent crusher, the long awaited, much prophesied King was to be born in Bethlehem. Mary, the impossible mother, was pregnant through the power of the Holy Spirit. Joseph, the faithful father, had stood by her and kept her safe. Augustus, the puppet Emperor had, out of a desire to charge more taxes, decreed the census that would enable Jesus to be born in Bethlehem. But there was one final step. Joseph and the now ‘obviously pregnant’ Mary had to make the journey from Nazareth to Galilee.
Nazareth was a small rural village with not much happening. Bethlehem was a small town about 80 miles away. This was a journey that would have to be made along dirt roads on foot, possibly with the assistance of a donkey. It would not have been what the pregnant Mary would have wanted to do. She would have been in the midst of the pains of pregnancy, with morning sickness and all sorts to contend with. An 80 mile journey that would have taken about 4 days to complete was not what Mary would have desired to do.
But God’s plans often involve a journey. To get from where we are to where He has in store for us there is a journey. And often it is not easy. But it is in the journey that we grow in faith. It is as we see God’s faithfulness and provision during the journey that our faith is strengthen. As James, Jesus’ brother, reminds us “God blesses the people who patiently endure testing. Afterward they will recieve the crown of life that God has promised to those who love him.” (James 1:12).
The journey isn’t always easy. The road we have to walk can be hard. It can be daunting. It may be the last thing we want to do right now. But just as Mary and Joseph had the destination in sight so do we. They knew they were on the path to Bethlehem, where they needed to be for God’s masterplan of love that had been in place from the before the start of creation to be carried out. They trusted God’s faithfulness and knew that the pain of the journey would be worth it. We too have our destination in sight. Because heaven touched earth, Jesus reaching out to us and stretching out His arms in love on that old rugged cross we can have the hope that through faith our destination is the crown of life. As we journey through the hardships of life we can take courage that this is not our final destination. We have not yet reached the end of the journey. Through the pain and trials and heartache and frustration keep journeying faithfully with God. The resounding message of Christmas is that God has a plan and the journey will be worth it. Stay faithful!

There's nothing about Mary (Advent Day 10) 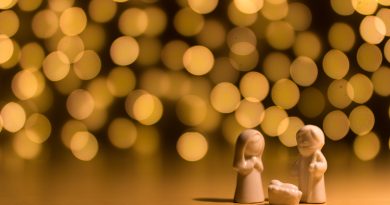