“And in the same region there were shepherds out in the field, keeping watch over their flock by night. And an angel of the Lord appeared to them, and the glory of the Lord shone around them, and they were filled with great fear. And the angel said to them, “Fear not, for behold, I bring you good news of great joy that will be for all the people. For unto you is born this day in the city of David a Savior, who is Christ the Lord. And this will be a sign for you: you will find a baby wrapped in swaddling cloths and lying in a manger.””
Luke 2:8‭-‬12

This is what the lead angel told the shepherds – Fear not. The reason they didn’t have to fear was because of the message the angel had. The message was not one of condemnation but one of love. A Savior has been born, who is Christ the Lord. Saviour was the baby’s job – that was what Jesus was going to do – save us. Christ was his title – it is the Greek translation of the Hebrew title Messiah – the promised deliverer Israel was waiting for. Lord was the baby’s identity, and this was the bit that would have blown the shepherds minds, for it was the boldest of all claims. Lord was the Greek translation of the Hebrew word yahweh – the personal name of God. The angel was telling the shepherds that God himself was the baby they would find in the manger. This is the very heart of the Christmas story. God took on flesh. The hands that placed stars in the sky were now wrapped in swaddling cloth.

This is the child that would change everything. A child whose birth literally split history into two. This was the child all creation had been waiting for. And yet He was overlooked and missed by most people around at the time. Bethlehem had no room for Him. As He grew up the majority of the Jewish people rejected Him, even crucifying Jesus on a cross. They missed the fact that the Son of God was in their midst. Oh that we would not make that same mistake! It is so easily done. There is so much extra stuff added on to the Christmas season now. Between parties, Santa, music, lights, presents, food, Christmas movies, tinsel, trees and turkey there is so much going on competing for our attention. The extra stuff isn’t necessarily bad in and off itself, but it can be a distraction. It can take our attention away from Jesus, who is the main thing. We celebrate something far greater than a red nosed reindeer. We celebrate a Saviour who is Christ the Lord.

This Christmas, take time to marvel not just at the fact that Jesus was born, but at who Jesus was. Presents are exciting, turkey and mincepies are tasty, but do not let them distract you from the amazing news of great joy that we do not have to fear any more for God is with us, among us. He entered the story so we could have the ending of peace and goodwill forever more. 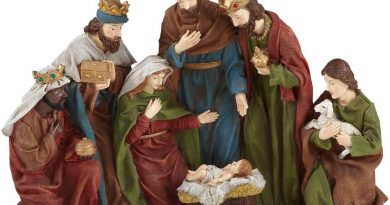