Last night I took part in a 10K race around my home town of Lisburn (I was doing it to raise funds to drill 2 boreholes to provide clean water for the people of Ibba, South Sudan). Before I signed up the furthest I had ran was about 5 kilometres, and I only signed up 3 weeks before the race, so it was quite ambitious. Initially things went well. It was rather warm, but I was running along, overtaking people, working my way through the crowd, trying to recreate the “Ridiculously photogenic runner” meme every time I passed someone on the sidelines with a camera.
Then I got to the 8 kilometre point, and knew I was on the home straight. I could up the pace and run home to the finish line and the fast food that was waiting afterwards. I hadn’t taken into account The Hill. What sort of sadistic person designs a race so that it ends with a hill? By 9 kilometres I was wrecked. I paused to catch my breath.
Which was when this random young lady dressed in red came past me, tapped me on the shoulder and urged me to “keep going”. Obviously I didn’t want to let her down. So instantly I charged off again, with renewed determination and energy. I don’t have my official time yet, but by my calculations I finished it in around 50 minutes, and beat the youth minister from my church which was my main target…
In life we need our ‘angels in red’. We need people who will come along side us when we are struggling and encourage us to keep going. We need people who will pick us up when we stumble. We need people who will spur us on when we get tired, so that we can “soar high on wings like eagles …run and not grow weary … walk and not faint” Isaiah 40:31.
In the New Testament in many of Paul’s letters he has words of encouragement for the local churches. But he needed encouragement too. One of his travelling companions for some of his missionary journeys was a guy called Barnabas. But Barnabas wasn’t his real name. It was a nickname he got given in Acts 4:36 – his real name was Joseph. So why was he called Barnabas? Barnabas meant “Son of encouragement”. He was nicknamed because he was such an encourager that people decided that was the best way to refer to him. In Acts 11 we read what happened when Barnabas went to Antioch: “he was filled with joy, and he encouraged the believers to stay true to the Lord. Barnabas was a good man, full of the Holy Spirit and strong in faith. And many people were brought to the Lord” Acts 11:23-24.
Paul knew that serving God wouldn’t always be easy. He knew there would be times he would need encouragement. And he made a point of travelling with a guy who had been nicknamed after his reputation for being an encourager. As we strive to seek God, to honour Him, to advance His Kingdom, and to love like Jesus first loved us, we need encouragers in our lives. We need people who will inspire us to dig deep and not give up. People who will encourage us to not hold back, but give God our all. We need to surround ourselves with people like that. And we need to be encouragers to those around us who are struggling. It doesn’t take much. Just a simple pat on the shoulder and the words “keep going” and you could be someone’s angel in red. Whose Barnabas do you need to be today? 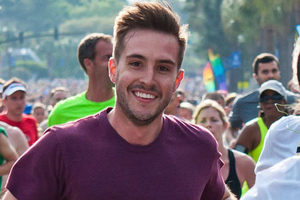 NB This isn’t me, this is the ridiculously photogenic runner. But I imagine I looked similar
[image source: http://cdn0.sbnation.com/entry_photo_images/3625759/a90_large_medium.jpg ]