I watched a movie recently called Forgiving Dr. Mengele. For those of you who don’t know, Dr. Mengele was a sadistic Nazi who experimented on twins, during the Holocaust. The movie starred Eva Kor; a survivor of Dr. Mengele’s experiments. Her twin sister wasn’t as lucky, and died from complications due to Dr. Mengele’s experimentation. The movie is about how Eva comes to know a former Nazi, and chooses to forgive him. After she forgives him someone suggests that she do what’s infinitely harder and forgive Dr. Mengele. Forgiving Dr. Mengele gives her freedom and surprisingly persecution from those that don’t think he should ever be forgiven from the atrocities that he did.
The argument in particular that caught my attention was from an elderly Jewish man. He said something like, “You should not have forgiven him because he did not make atonement. He did not do anything to pay for his wrongs.” So I looked up the word ‘atonement’ and according to dictionary.com it means: “the satisfaction or reparation for a wrong or injury; amends.” He was correct. That old man was entirely right. There can be no forgiveness without atonement. And Dr. Mengele did not atone for his sins, not in the least.
But his argument was flawed in only one regard. He assumed that Dr. Mengele had to be the one to atone. “He himself bore our sins in his body on the tree, so that we might die to sins and live for righteousness; by his wounds you have been healed” (1 Peter 2:24). Just as this verse says, Jesus Christ is the atonement for all sins. Which means his sacrifice atoned for what Dr. Mengele did to Eva Kor. He made amends for what Dr. Mengele didn’t. Now Eva Kor is free to forgive.
And we are all free to forgive. Think about it, not just to be forgiven by God but to forgive others. The death of our Lord has made it possible for us to forgive others. And by not forgiving others you are saying that Jesus’ death on the cross was not amends enough for what that person did to you. I just want you to think of the statement ‘Jesus is the atoning sacrifice’ in a different light. 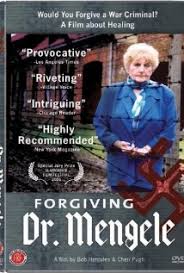